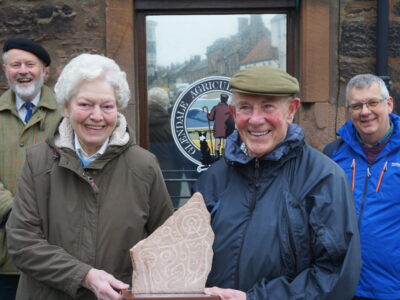 Awarded annually to someone who has made an outstanding contribution to the Glendale area the 2020 award acknowledges this husband and wife’s service to the Glendale community over many decades. The locally designed trophy was presented by the Society’s President Lord James Joicey and Patrick Sheard Chairman of the GTT.

Though the Lifetime Achievement Award may not have been presented at the Glendale Show this year, as it is usually, the Society were thrilled to be able to make this announcement just before Christmas. As is usual it recognises deep-rooted commitment to the community and generosity of spirit – of which, the Roys have in abundance.

Commenting Patrick said: “A strong sense of community has always been integral to Glendale and its people, and the events that have unfolded this year have only seen this elevated. Noel and Jan go over and above to help galvanise our community and their values of care and generosity have been quietly shown for many, many years to countless individuals across the Glendale community and further afield.” 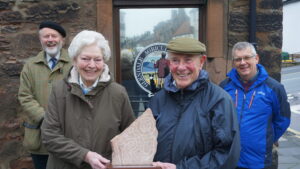 rked as a GP in the area for more than 30 years, Noel has played a profoundly important role in the lives of so many Glendale families. Hugely involved with the Drop-in Centre in Wooler amongst other initiatives, his deep and heartfelt commitment has also extended well into his retirement.

Ever present and supporting behind the scenes is Janet, Noel’s wife, who has always played an integral part in providing whatever practicalities Roy’s work has required. Janet herself was a long serving committee member of the local Save the Children, and together as a couple they have tirelessly prioritised their commitment to local businesses and events across the area.

In presenting the award, Lord James Joicey, said: “On behalf of the whole community, I would like to thank Noel and Janet for all of their commitment, involvement and generosity over the years. Every response we received indicated the huge impact the pair have had on the lives of people in our community, and in particular, their active care to those who are elderly, or sick or isolated has proved especially noteworthy.

“This year has been so difficult for so many people and we are absolutely thrilled to be able to present this award to two people who are so noted and valued within Glendale, and end this year on a much deserved high for them and their family.

Upon receiving his Lifetime Achievement Award, Noel said: “We are grateful and honoured to receive the award, because it has been given by those who live and work in the place which welcomed us, well over fifty years ago, and which we have grown to love.

Medical practice when we came here was still run from home day and night and there was an expectation, made with good humour, that joining in meals on wheels and other local efforts was part of the family job. We followed where others led, made friends and had a lot of fun over the years.

Glendale people have given us generous support, taking on our interest in rural India. Schools, churches and families have raised funds to build a primary school and dairy farm over there, twinned for many years with our First school.

The farming traditions of Glendale are strong and they were all new to us when we came here. Most of our patients worked in agriculture then and our medical practice was just one of many small organisations supporting it. We had a lot to learn: home visiting played a large part in general practice in those days and we got to know a lot of farming families and individuals very quickly.

Local doctors had to be on hand in the medical tent at Glendale Show every year, so for me it was always one of the events of the year. Nowadays I enjoy the company of old friends in the Horticultural tent, another reason to take pleasure in this award and to look forward to the next Show.”

Sculpted by local artist Paul Greenwood, the trophy is a carving on local Doddington Stone. It is reminiscent of the iconic cup and ring marked rocks that are famous in the Glendale area. Noel and Janet will have their names added to the plaque and will get to proudly hold on to the trophy for the coming year.

Bedmax, Bedmax Retailer of the Year Awards
You may also like 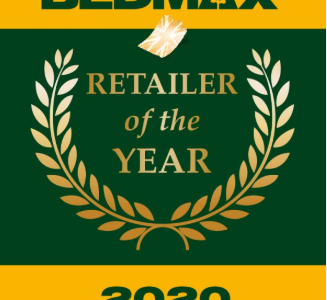 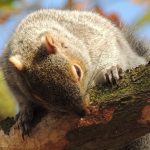