The Scottish Borders Federation of Young Farmers, Livestock enthusiasts to battle it out in the show ring

The culmination and rewards of a winters work for some Borders Young Farmers will come to fruition at St Boswells Auction mart on Thursday 12th March when they showcase their calves. This is the finale of The Suckled Calf Wintering Competition, initiated by the  Borders Federation of Young Farmers (BFYF) in association with Harrison and Hetherington.

The focus of this competition is to reward profit and performance of the individual calf from buying to selling.  In October 2019 , Harrison & Hetherington financed the purchase of a calf from St Boswells Mart for fourteen members of the Borders Federation of Young Farmers.

Since the purchase of their calves, each of the Young Farmers have been over-wintering them, with the focus being on growth, weight gain and most importantly gross margin between buying and selling price.

The rules of the competition stated one calf purchase per competitor and that cattle could be purchased in pens and split between competitors but were weighed individually and priced at the same price per kg as the pen.

There are four classes, heifers and bullocks under and over 450 kilos with prize money and rosettes awarded to the first three places.  An impressive trophy and prize money will be awarded to the owner of the animal which achieves the largest gross margin.

Prize money will also be awarded to the steer and heifer with the greatest weight gain.

“The future of livestock farming in the Borders is in the hands of the next generation and we at Harrison & Hetherington wanted to involve the local Young Farmers to give them a taste of buying and selling through the live ring, as well as giving them experience of feeding cattle, concentrating on how the cattle perform and the margin achievable. The aim of the competition is to focus on the commercial element of growing and feeding cattle, not specifically the show element, although of course quality is important.

“We were delighted with the enthusiasm shown by the Borders Young Farmers Clubs and their members to reintroduce this competition and make it an annual event. Fourteen good calves were purchased, a mixture of both Autumn 2018 born and Spring 2019 born calves over three sales held at St Boswells the 10th, 17th and 24th of October and we look forward to seeing them on the 12th March at St Boswells.

“Although this competition is very much about the production of commercial cattle, there will be an optional show for halter broken cattle on the morning of the sale. Judging this class will be well known local Suckler breeder feeder, Robert Neill from Upper Nesbit Farm.”

“I am judging them as a show animal and as such what I am looking for will be a good all- round animal, which is well-presented and hopefully something which has the X factor. First impressions and presentation is very important as it demonstrates to the wider public, professionalism within the wider industry.”

After an 18-year gap the BFYF was keen to re-establish this competition as it wanted to encourage and award young Borders Livestock farmers for their stockmanship skills. The overall winner the 2020 competition will be awarded with the original accolade of the Bank of Scotland Gross Margin Challenge Trophy, which was last presented to Dougie Runciman in 2002. 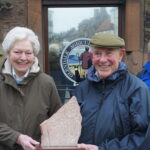